Medical Help for a Senior Citizen

Mom is 100 years old. We have hired a service to give her her daily medications. The pharmacy fills the cassette and the aid comes in to her apartment three times a day to give the pills to her. Unfortunately we have found errors several times where either pills were not given or pills for the wrong time of day were given.  So now we have to switch pharmacies for one that supplies blister packs which can be scanned by a computer to ensure that the proper medication is given at the proper time. What a hassle!
Posted by Peggy at 11:49 AM No comments:

I saw a picture in a quilt catalog for a kit to make a twin sized quilt which looked like scattered leaves. I thought I could do that in a queen size without a pattern. The hard part was arranging the nine-patch leaves in such a manner as to look scattered. I did it by gluing leaf shapes on graph paper. However I didn't realize the difficulty in putting together squares that were not in line but were scattered.  I laid out the original design on the floor but went back to my graph paper and tried to figure out how to put them together. Note the dark lines and the numbers. I am going on a quilt retreat next weekend but I am not sure how to  take all this information with me. 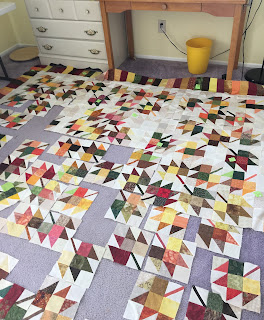 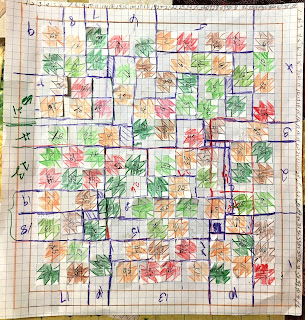 We do not live in the country. We live in a subdivision without a single empty lot. However we do have deer.  A week ago someone hit one with their car on the next street.  We have cyclone fences which pose no obstacle whatever to the deer. Everyone has a dog or two but the deer are not alarmed. 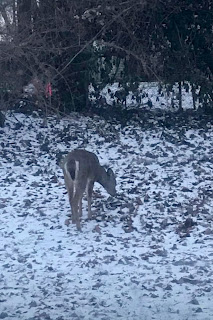 This one jumped a cyclone fence with its companion into our neighbor's yard. they have two dogs. When we let Mindy out the deer just looked up and jumped the next fence.
Posted by Peggy at 3:09 PM No comments:

The Sky is Falling

Last night, as I sat in the living room doing my embroidery with Mindy snuggled up on the sofa next to me, I heard a loud bang that shook the house.   Mindy jumped up barking and Hubby came running downstairs saying " That was an explosion!"  We heard no sirens but shortly after wards we began to hear on Facebook and the news channels that a meteor had exploded over southeast Michigan.  My son, Jim, saw the flash as he was driving on I275.

Leader Dog for the Blind

Leader Dog for the blind is looking for puppy raisers. We did it three times and it was very rewarding. Our first puppy was a golden retriever we named Penny. She was a lively girl and passed her training. She was given to a lovely lady who lived in Augusta, Georgia, 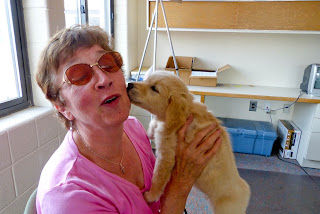 The second puppy we raised was a golden retriever- labrador retriever cross which we called Mindy. Mindy won our hearts over from the beginning and it was hard to send her back to Leader dog.  However they called us to say she was a little fearful and would not walk past statues. We gladly took her to keep. 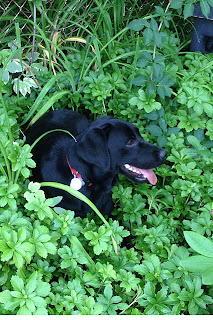 The third dog was a labrador retriever we named Suki. Suki ws a good dog but not much interested in being a guide dog.  She preferred to play with other dogs and chase squirrels. She had a temendous appetite for hosta plants and could eat them down to the ground.  Needless to say, she didn't make the grade and Leader Dog placed her as a family pet. 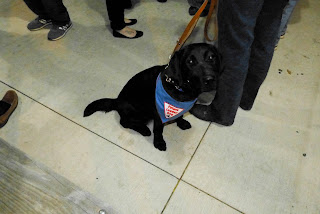 We just don't have the energy to do it again but it was a neat experience. Leader Dog was wonderful to work with.

For Christmas I asked for red wine glasses. Unfortunately I got wine glasses but they were for white wine. I hated to return them. I find it nasty to return gifts. However, I knew they were from Kroger, so I had to find a super Kroger store and they had them.  I took the two boxes of red wine glasses to customer service and explained that I had white wine glasses in the car with no receipt, could I exchange them.  The lady opened the box and said 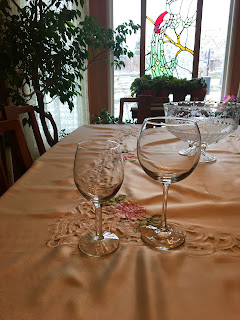 "These are white." I know the glass is white but they are for red wine and the ones I had were for white wine. She asked what the difference was.  So I explained.  In the end she allowed me to exchange them but I think she was blown away that I could be so trivial.
Posted by Peggy at 9:19 AM No comments:

Every year right before the first frost I bring all my potted geraniums into the basement. I have done that for almost ten years. Since a geranium is a tender perennial, they keep growing and I replant them every year. I wish I had a picture of them in full bloom in the summer.  Now they are under a light in the basement. Hubby has the light on a timer and I water the plants once a week.  This year I am trying to overwinter my fuschia as well. 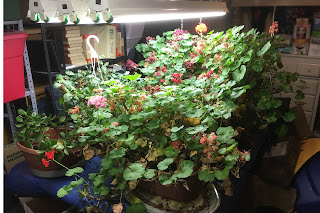 It is a shame that flag waving has become associated with the Republican party.  My Dad was a dedicated flag waver.  He put up a flag pole at his house on Forest Lane after a visit to Russia. He also had one installed at his home in Florida. Dad was an independent with Democrat leanings. I have inherited my Dad's love of flag waving but I am definitely a Democrat. 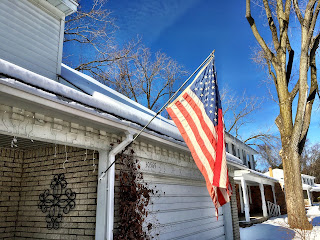 Do you Want to Build a Snowman? 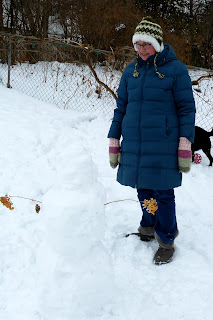 I haven't built a snowman in over thirty years, maybe forty years. The weather was right and there was plenty of snow. Mindy was outside with me, however, she kept snatching the arms off of my snowman.  Hubby doesn't play so much in the snow, however, he really enjoys operating "big red" his snowblower.

Hubby is very interested in pipe organs and has been most of his life. Last June we went to Organ Day in Philadelphia held at the Macy store. They have the Wanamaker Organ which is the largest working pipe organ in the world.

On that day we went to five different organ presentations. One included an orchestra and choir. Another was alongside a silent movie called Safety Last! starring Harold Lloyd. The souvenir of the day was a lamp made out of organ pipes. 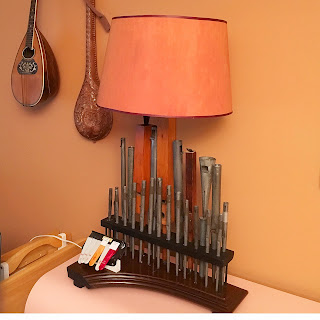 Every year on January 6th, the feast of thee Epiphany, I pack away my Christmas crib figurines. They were made for me by Maggi Ashcraft who was a teacher at Sacred Heart Academy when my children were there. Gretel began first grade there in 1985. The figurines have been mended with Elmers Glue, especially the camel and the angel wings.  I especially love the little pig except I can't imagine a Jewish stable having a pig. 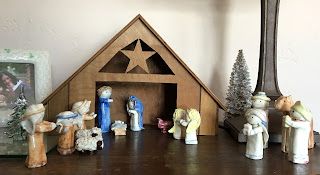 Friday is the day that I clean house. Afterward, Fervor and I take a nap.  Truthfully, Fervor naps all day long. Do you like the socks Gretel gave me for Christmas? 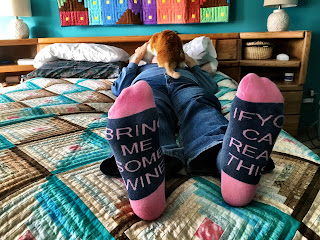 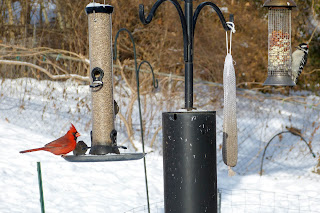 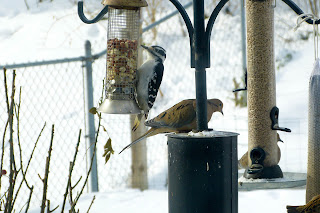 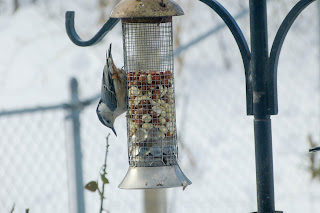 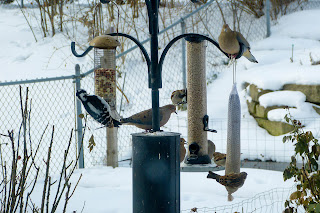 Hubby feeds the birds regularly in our backyard.  He puts out sunflower hearts, thistle and peanuts. It is fun to see all the birds that come.  We get cardinals and blue jays, chickadees and gold finches, nuthatches and three different types of woodpeckers and of course, sparrows and mourning doves. Now in the winter we also get juncos. Occasionally we get a flicker and a few days ago I saw a tufted titmouse.  Apparently it is also a free lunch for a hawk which we have seen four times
in the last few weeks. Once with a sparrow that didn't dive deep enough into the yews. 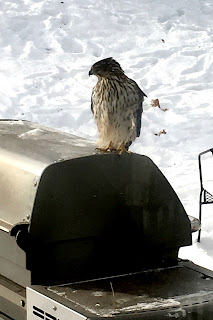 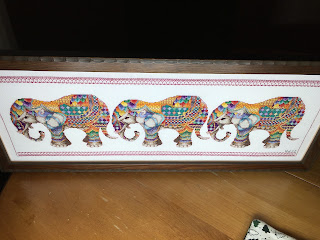 My daughter-in-law, Rejina, always acts very appreciative of any craft gift I give her which always encourages me to give more. So for Christmas this year I did this picture of Elephants on Parade in counted cross stitch.  It was challenging and it really turned out nicely.  She has several elephant figurines and pictures so I hoped it would interest her.
Posted by Peggy at 5:20 PM 1 comment: 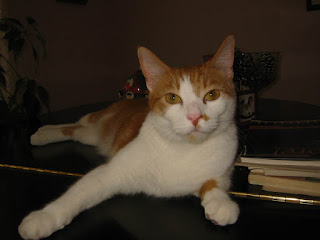 We have a cat, Fervor, who came to us by way of my daughter ,Martha, is getting quite old.
He will be 16 this year. The vet has noticed that he has lost one and a half pounds over the last year and his kidney function is diminishing.  We are on a mission to fatten him up with choice bits of tuna and chicken, along with gourmet cat dinners. At night he has become increasingly cuddly except for the paws in my face which I do not consider cuddly. 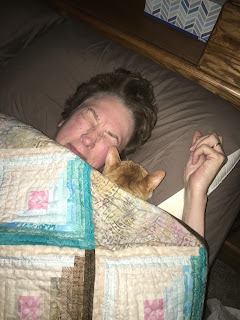 Usually on Mondays I meet with friends at the local Panera Restaurant and we knit. Yesterday I got a call from one of the women saying she had lots of lasagna and lets meet at her home to start the new year. Six of us met and had lots of chatter but not much knitting. I meant to take a picture of the group but forgot.
Posted by Peggy at 6:13 PM 2 comments: