The Last Rose of Summer

Today was a perfect day. Mom and I went out to lunch and did a little shopping. I was going to help her clean her cupboards but we decided to save that for a colder, not so nice, day. We still have lots of tomatoes coming, green peppers too, and lots of eggplants. The roses are still budding but I need to cut down the black eyed susans and maybe the beebalm too. I know the cold weather and the first frost are not far away.
Posted by Peggy at 2:30 PM 3 comments:

I survived!It was difficult. I mean it was difficult to keep my stomach and my butt tucked in so that I stayed upright while I did the exercises.(I wore this belt that helped keep me afloat) So many of the exercises taxed my mental abilities to keep arms and legs going in the correct direction. On the jumping Jacks, you went underwater if you got it mixed up. The teacher was so slender but very encouraging and helpful. Tomorrow I have shallow water aerobics.
Posted by Peggy at 4:52 PM No comments: 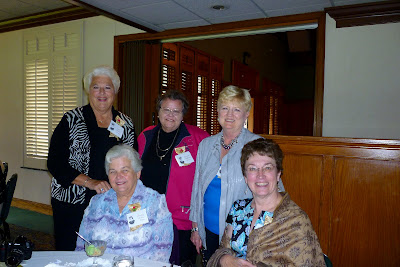 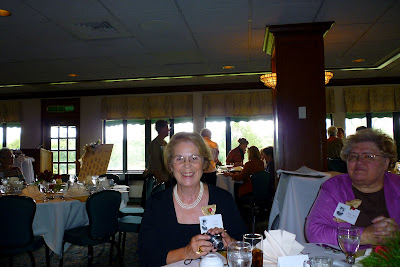 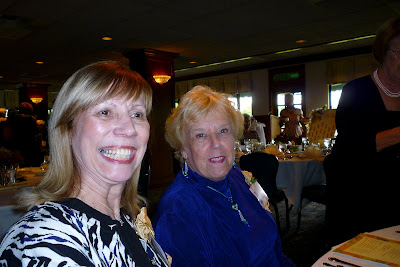 Today I went to my 50th high school class reunion. I graduated from Our Lady of Mercy High School in Detroit in 1960. Out of the class of 192, 96 showed up for the reunion. It was fun to see everyone. Some people you could recognize when they walked in the door. Others were a surprise when you saw their name tag. And still others, when you saw their name tag, you didn't even remember that they were in your class. For some people, high school was a pinnacle for them. It was the best time of their lives. That wasn't really the case for me. High school was fun, certainly more fun than grade school. (We didn't have middle school or junior high back then.) But for me college was more fun and even more fun was raising a family. Then after I went back to school and became an engineer, working was the best. Now that I am retired and I am active in the Lion's Club, Master Gardener Society, and the Quilt guild, life couldn't get much better.
Posted by Peggy at 4:48 PM 2 comments:

I Signed Up at the YMCA

Well, I signed up at the YMCA for water aerobics, shallow end twice a week and deep in once a week. I also signed up for "Silver Sneakers" which is an exercise class. Now if I can just do push aways from the dining room table I should be in great shape.
Posted by Peggy at 2:45 PM No comments:

I had lunch on Monday with a friend I have known since 8th grade.(which is well over 50 years ago) She lives outside of Philadelphia and now, that her mother has died, doesn't get back to Michigan nearly as often as before. Still it is amazing that we can sit and talk for hours about nothing. We aren't old enough to sit and reminisce but I am sure that will happen some day. For now, we are both very busy and active retirees, still enjoying the present.
Posted by Peggy at 7:00 PM No comments: 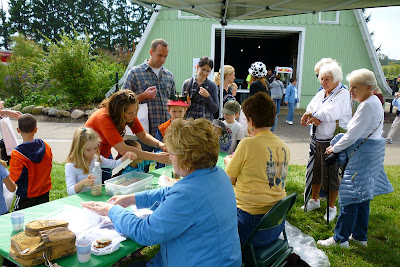 Saturday, Hubby and I worked at the Tolgate Family Fair. This is a free event for families. The kids make bird feeders (that was where I worked), hats, cotton ball sheep, pumpkin painting, face painting and others stuff. They had a butterfly lady there along with a bug man who had a large tarantula and a scorpion. They had lizards too. There was a band, free popcorn, hot dogs and cookies. There was honey made on site and a cider press demonstrating how to make cider. There were still more activities. A really fun day, a perfect place to take grandchildren.
Posted by Peggy at 8:22 AM No comments:

Well, Spanish classes stared up again last night. The whole month of August I studied Spanish diligently so that I wouldn't feel like the class dummy. It was to no avail. The teacher started right in on the different tenses. I thought I knew them but not the Conditional and the present perfect. In fact I don't know all these tenses in English. Anyway, I am going to have to find time to do a lot of studying. (I wonder what tense "I am going to have to study" is.)
Posted by Peggy at 7:21 PM No comments:

I have been surprised by how many of my friends and acquaintances prefer to be called an unusual name by their grandchildren. I have heard of "Oma", "G-ma" and "Moma". These are different from ethnic names like "Bubbie" or the Japanese word that my grandchild, Russell uses for his maternal grandmother. When I was small I called my grandmother Grandma F--- or Grandma H---. Now I understand that because of divorce and remarriage that won't work all of the time because their are two Grandma W---'s. So I have become Grandma Peggy, which is fine with me. When I worked at a day care center teaching piano the kids called me Miss Peggy which more often than not came out as Miss Piggy.
Posted by Peggy at 7:31 AM No comments:

Well, today I learned how to maintain the MGSOC calendar. This is my debut into working with HTML. To see my calender go to http://www.mgsoc,org/. I keep telling myself I am not too old to learn new tricks.(note that if you curser over the MGSOC it will tell you what the letters mean. Tricky eh?)
Posted by Peggy at 9:33 AM 1 comment:

I made up a schedule for myself and I did it all on Excel.(My cousin,Marianne, would be proud of me because I even used colors)I got up an hour later than I was supposed to but still got everything done. I walked a mile and a half, planted pansies and tulip bulbs,changed my sheets, studied Spanish and HTML and even played the piano for a half hour. I read my book and quilted on my wall hanging. I am really tired.
Posted by Peggy at 7:10 PM No comments:

So Much to Tell About 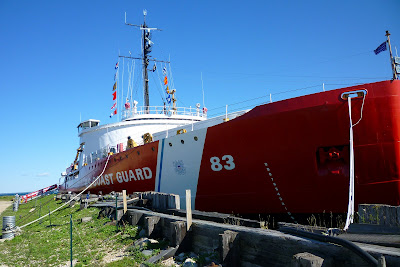 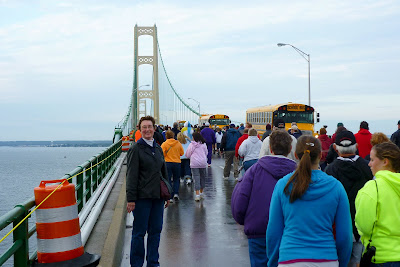 One of the problems with a busy life is there is no time to write it all down. A week ago today, Hubby and I drove up to Mackinaw City to walk across the Mackinac Bridge on Labor Day. Sunday was beautiful, We walked around the city and toured the old ice-breaker Mackinac. That was surprisingly interesting. It has since been retired as it took 75 men to operate. The new ship is smaller, more powerful and requires a much smaller crew. It is also named the Mackinac.

On Monday when we got up at 5:30 AM it was raining. We had a light breakfast, no coffee, (there are no Porta Potties on the bridge) and walked the half mile to the municipal dock where over a hundred school buses waited to transfer people across the bridge. The bridge is a little over 5 miles long. The city was very organized. The bus trip cost $5. They filled 10 buses at a time, they all pulled out together and 10 more buses pulled in for loading. By thee time we crossed the bridge to St. Ignace the rain had stopped. They said 45,000 people walked the bridge that day. There was an old couple who shuffled the entire 5 miles across the bridge. There were people of all ages, some pushed wheel chairs with handicapped people in them and there were a lot of kids some in strollers. The National Guard lined the sides of the bridge and numerous police and coast guard patrolled underneath. By the time we had walked the bridge and back to the hotel we had covered 7 miles.

Tuesday we drove back home. There was no rain but a lot of wind. Hubby had to really hold on to the steering wheel and there were several trucks pulling campers who were having troubles. If this wind had occurred on Monday they would have had to cancel the walk. We got home with just enough time to take a nap before our Master Gardeners meeting which was held at Telly's nursery. It was all about fall blooming plants and not one to miss.

Wednesday was the first Lion's Club meeting of the year and my debut as Tail Twister. We had lost our chef and his kitchen in the city hall so we tried a new caterer, Salvatore Scallopini, and dinner was wonderful.

Thursday my Friend, Carole, and I left for Madison Wisconsin for a Quilt Expo. Carole and I have gone on trips together many times in the past and travel very well together. The quilters' convention was wonderful. This was so much better than the Chicago convention. This one had so many bed quilts as opposed to art quilts, many were hand quilted. We also took classes which were only $10 each and extremely practical and well done. Both, Carole and I, love Italian and Mexican food and even though at the end of the day we were exhausted we did manage to swim in the pool and, of course, talked non stop. The Quilt Expo ran from Thursday through Saturday. We got home before midnight on Saturday.

Sunday, my daughter-in-law and her mother and her son, Sammy were in town but leaving by 1 PM so we met them for breakfast and a trip to a lovely park in Taylor where Sammy could run and see the ducks. When I got home, Hubby and I took a nap. Poor Carole was driving to Minneapolis today. Don't ask me how she does it. 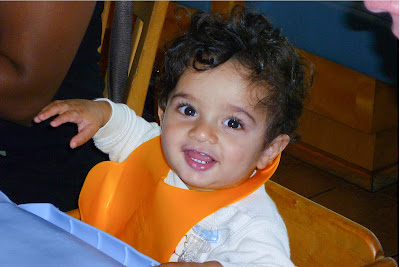 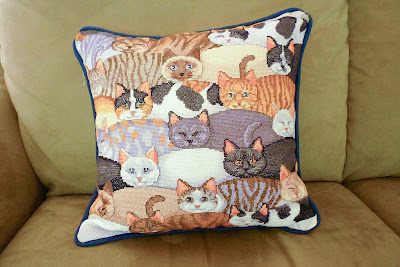 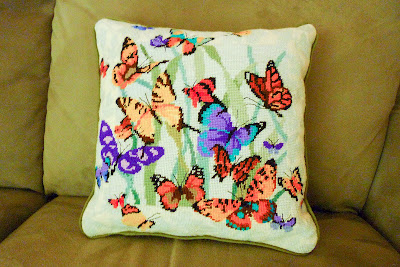 Last February I mentioned that I had to get my list of "to do" projects "done". Well today I finished two of them. The Kitty Pillow I cross stitched but the butterfly pillow is needlepoint done by my Mom. Now I am ready to start some quilting.
Posted by Peggy at 12:06 PM No comments:

Hubby is trying to teach me about the HTML language. I am curious too. Maybe I will start by creating a family website. I will be the calendar editor for the Master Gardener Website. I go for my final instructions next Tuesday.
Posted by Peggy at 1:39 PM No comments: