I know it has been a long time since I have blogged.  Part of the reason is nothing interesting has happened and another thing is too much has happened.  I spent two weeks in Brooklyn because Gretel broke her foot and had to have surgery.  She broke it at a quilt retreat. (Hubby said we should do something less risky, like sky diving.) I had a good time with Molly and even did a little cooking! After a came back I spent a week in Ohio because Mary's school district did not have the same break as Sofie's.  I have a whole new respect for Taekwondo. It really teaches kids to listen.  I came back from these excursions in time for another quilt retreat. This one was very pleasant and uneventful. 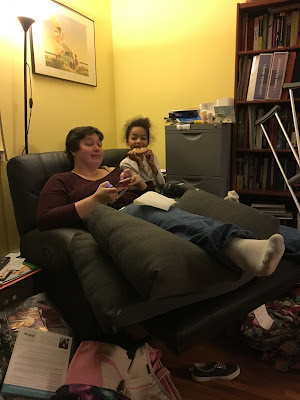 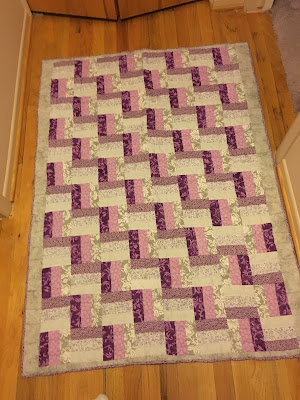 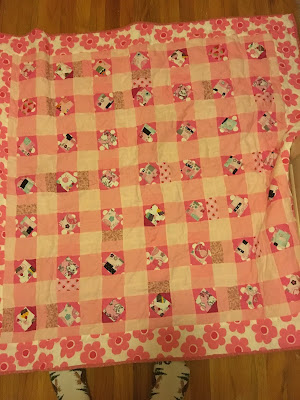 I have been working on several charity quilts.  I don't belong to a guild so I am not under an obligation to make them, but my friend, Linda, is in charge of the Charity committee for a quilt guild so I help her out a little. These quilts are made mostly from my scraps and I machine quilt them.  In my opinion, hand quilting is much easier than machine quilting. It does take LOTS longer.  Hand quilting hurts your fingers, machine quilting hurts your shoulders. Hand quilting is more forgiving of uneven piecing. The first two quilts have machine quilting which is nothing short of embarrassing, probably because my piecing and more likely my backing was not even. The third is going very well. I used a wide backing and a batting that was very flat. I also took my time. The machine can go quite fast and it is easy to get wobbles. 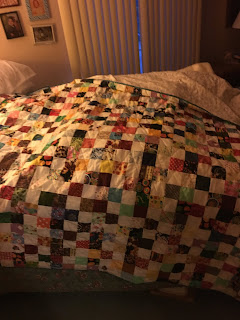 I am hoping that tonight Hubby will set up my quilt frame and I can begin quilting my storm at sea.