Last night we watched a Nova program titled "Plants which behave badly".  It was all about orchids and about how they deceive pollinators to their advantage. They also mentioned that in the last years there has been real success in growing moth orchids. So much so that they have become the most popular house plant around the world. I have had moth orchids for years and I did the ice cube watering method and they never bloomed. After watching my Mom douse them, and hers bloomed continually, I decided to change my ways.  I now water tham about a quarter cup every Friday and here they are. I even have two more stems of buds. 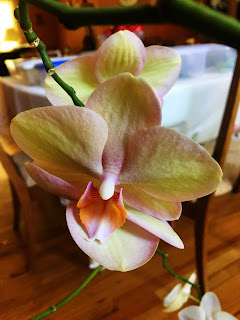 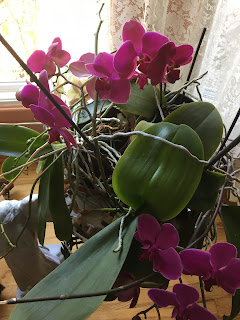 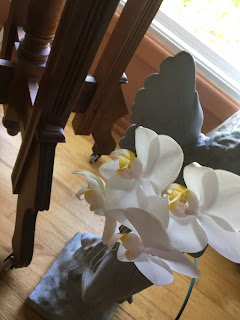 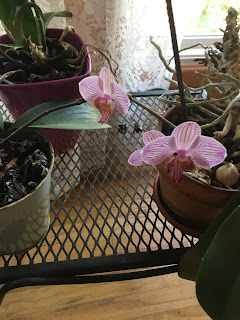 Hubby was stung by a yellow jacket yesterday on the patio. He said he brushed off his shorts and it stung him.  He then did some research on the web and came up with a dish of water with cat food in it, Supposed to be sure fire for catching bees.  It does catch flies.  He then hit the hardware store and got bee traps and fly paper. It is war!! 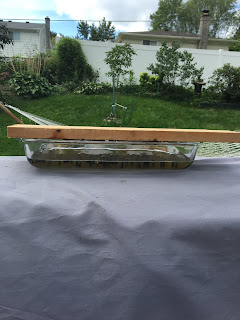 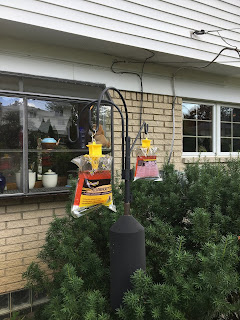 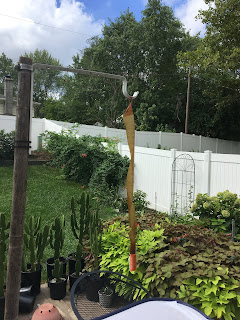 I finished squares three and four for my Hawaiian quilt.  I have to learn how to keep them flatter. 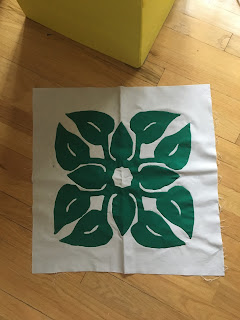 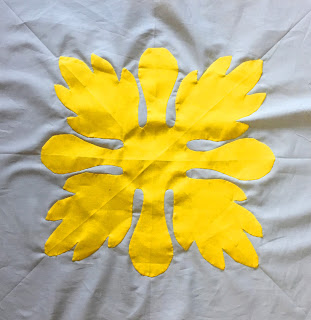 The yellow is prettier than the picture shows.
Posted by Peggy at 7:11 AM No comments:

Furniture for the Dollhouse

Lily, who does my hair gave me several dollhouse furniture kits. The kits were made by Xacto, but are not made anymore. They are a little tedious to make but if I only do a step or two a day, it works better. I finished this side are chair and am working on the settee. I have too much time on my hands. I still am having trouble with the finish. 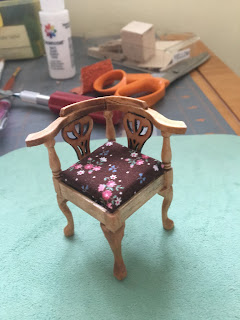 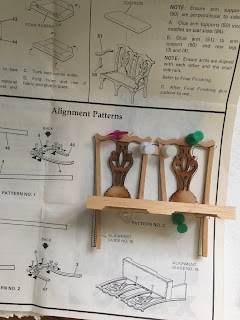 We have a small vegetable garden.  This year Hubby decided to grow his tomatoes from seed. He also grows his wax beans and zucchini from seed. The weather was right this year for the flowers and the vegetables.  The zucchini has stopped but the beans are in their second crop and the tomatoes are growing like mad. 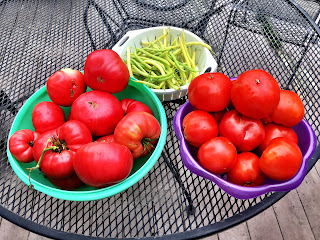 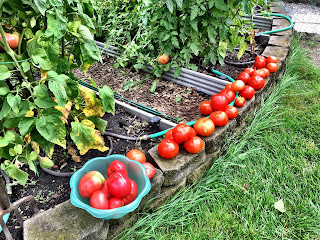 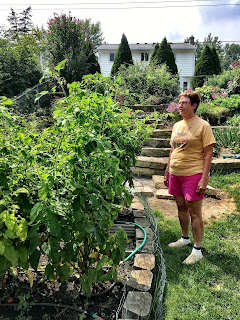 I finished appliqueing the second square on my Hawaiian quilt. It is a good thing that Gretel is a quilter because she may have to finish it. 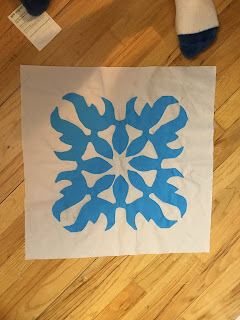 A few years ago, my brother made me an offer.  If I made a quilt for his daughter he would make a doll house for me. I said I would be delighted to make the quilt but I had a dollhouse in the basement that my daughter, Mary, had bought when she was in high school.  It was in bad shape with parts missing. He repaired it and it is beautiful. 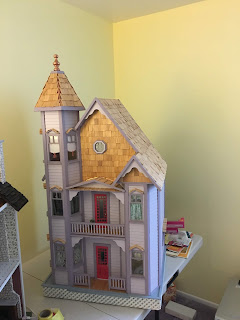 While he was working on the doll house, he was selling his electric trains. The man who came to buy them saw my dollhouse as Mike was working on it.  He said "If you like dollhouses I have one in my basement that you can have.  Mike fixed that one up for the grand daughters to play with. 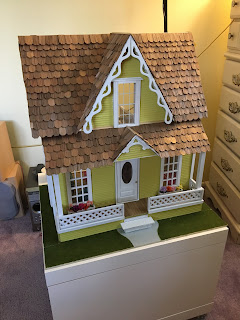 I was telling the women on a quilt retreat about the dollhouses when my friend, Linda, said she had one in her basement that needed repair.  I could have it.  I gave it to Mike.  It only cost me $700 but now I have another house.  This one wired for electricity. 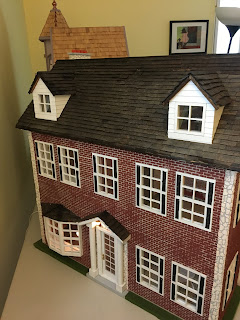 For Christmas I asked for books on making dollhouse furniture. My son, Jim, obliged.  This is my first attempt.  It looks a little wonky but it took three tries to get it only this wonky. 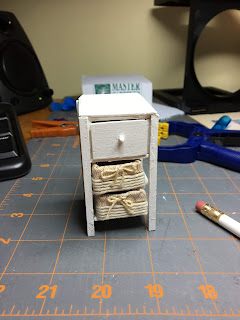 I bought this kit at a Pfaff booth at a quilting convention in Madison, Wisconsin. The directions were a mind puzzle. 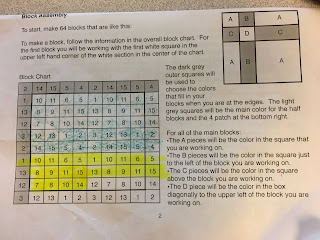 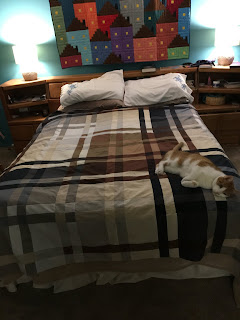 The kit had almost enough material. I will never make this quilt again. I was thinking that I might machine quilt a quarter inch from the edges of the narrow strip and maybe quilt a bear or a tree on the big squares.  I need something woodsy for the back. I think I will let it rest awhile
Posted by Peggy at 6:39 PM 2 comments:

I finished appliqueing the first square of my Hawaiian quilt.  I have the book Hawaiian Quilting by Elizabeth Root. It has twenty patterns to cut out and applique. She suggests quilting each square with the "quilt as you go" method because there is so much quilting in each square.I have to get all the squares appliqued first and that is a tremendous project. I am using many colors on a pale gray background. 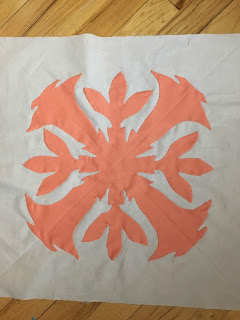 Gretel came in from Brooklyn to join me on another quilt retreat at Create A Memory Inn. Wehad the nicest group of ten quilters and one scrap booker. We were there from Thursday morning until Sunday morning. Gretel finished the top of a quilt and so did I. 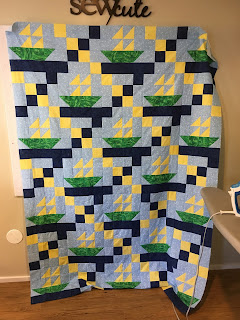 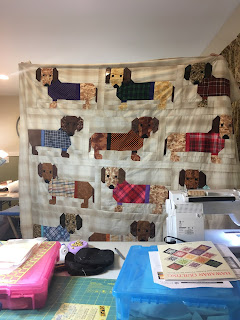 Two of the Monarch chrysalis opened today. One butterfly was substantially larger than the other but the both seem fine. When the larger one flew out of the cage it landed on my arm.  I walked over to the flower bed and it left me for an echinacea. 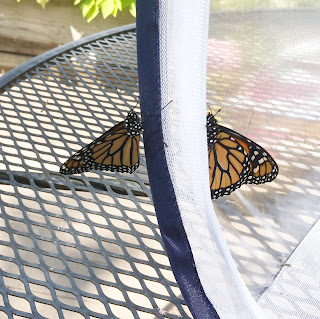 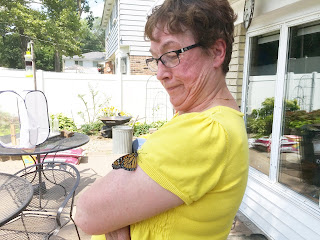 My friend, Linda, loaned me her machine quilting practice sheet. It really is neat. She has already made the sandwich for quilting. I use water soluble thread in the bobbin and colored thread in the top.  After I follow the lines on the practice sheet,(or attempt to follow them). I can turn the piece over, spray with water and iron dry. Then all I have to do is pull on the top threads and they come out very easily because the bobbin thread is gone.  I find machine quilting to be quite difficult unless I am doing straight stitches.  Then I use the walking foot. 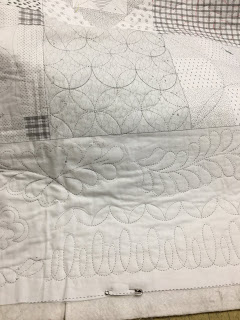