Earlier this year, I went for physical therapy for my knee and back. One of the technicians was a young man named Andrew. He was so kind and attentive. He told me he was a veteran and had intended to have a career in the army except he was injured in Iraq and would still need follow-up surgery on his foot. I decided to make him a Quilt of Valor. The Cameo quilt Guild would like us to present him with it at their quilt show.  I don't even know Andrew's last name but I hope he likes the quilt. 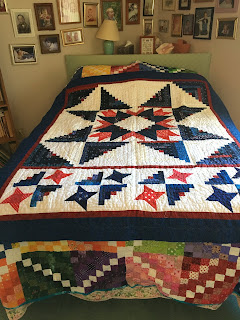